Over the weekend of 5 and 6 September 2015, we launched Anni Snyman’s first Site_Specific Karoo Geoglyph, the Snake Eagle Thinking Path, in Matjiesfontein. Matjiesfontein is a historical little town in the Karoo area of South Africa, situated right next to the railroad and the N1 highway that connects Johannesburg and Cape Town. The site of the geoglyph is the area in which a regiment of British soldiers were stationed during the Anglo Boer war. While creating the geoglyph (over three separate working weeks of which I joined for the two last ones) we found rusted food tins, buttons, pieces of glass and even a bullet shell or two that speaks of those long-gone years.

The Snake Eagle Thinking Path (meander) in Matjiesfontein is the first permanent geoglyph created as part of the Karoo Geoglyph Project. It is in honour of a breeding pair of Black Chested Snake Eagles resident in the area. We hope that the geoglyph will attract global attention via Google Earth to the precarious semi-arid biome of the Karoo, encouraging tourists to visit the town of Matjiesfontein and walk the meander.

I am one of the artists who already created some artworks on the site, visible as you walking the geoglyph, and photo documentation of these works were exhibited as part of the launch event: 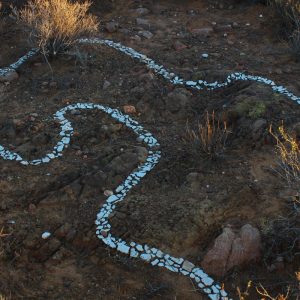 On Sunday morning a several couple of people were up before dawn to prepare for the inaugural walk at sunrise, officially launching the Snake Eagle Thinking Path. May we soar into the future, towards a life of unity and harmony – of communities, species and us within our environment.

For more photographs and information, visit the following links: